How to Get Address of Named Range in Excel

The ADDRESS function is useful when you need to find the address of a named range in Excel.

This guide will explain how we can use the ADDRESS, ROW, and COLUMN functions to get a named range’s first and last cell.

A named range is used to refer to one or more cells. It is usually used to make formulas easier to parse. For example, instead of using the formula =SUM(A4:A24), we can have a formula like =SUM(Daily_Sales).

To get the scope or range of a named range, we can use the ADDRESS function. Let’s take a look at a quick example!

Suppose we have a table with employee data, including first name, last name, and email. The entire table has been assigned the name ‘EmployeeTable’. Given the named range, is it possible to get the full address?

How can we obtain these two key cells? Excel has an ADDRESS function that returns the address of a specific row and column. We can use this function alongside the ROW and COLUMN functions to calculate the first and last cells.

Now that we know what functions to use, let’s explore how the mentioned functions are used to create a formula to get the address of a named range.

Let’s take a look at a real example of a formula that allows us to get the address of a named range in an Excel spreadsheet.

To get the address of our employee table, we first compute the location of the first cell in cell G4. Next, we’ll locate the address of the last cell in the named range in cell G5. We can now simply concatenate these values to get the full address.

To get the first cell, we just need to use the following formula:

In this example, the arguments @ROW(EmployeeTable) and @COLUMN(EmployeeTable) both return 1. The ADDRESS function outputs the cell found in the first row and first column, which is cell A1.

To get the last cell, we can use the following formula:

To get the final address, we use this simple formula:

If you’re ready to try out the formulas yourself in Excel, follow the guide in the next section!

How to Get Address of Named Range in Excel

We will now guide you through how to start using the ADDRESS function in Excel to get the full address of a named range. You’ll learn how we can use the ROW and COLUMN functions to locate the first and last cells of the named range.

Follow these steps to get the address of named ranges in Excel:

This guide has explained everything you need to start using the ADDRESS function to get the address of a named range in Excel. We’ve learned how we can use the ROW and COLUMN functions to get the boundaries of a named range and use the results to return the final address.

You can now use these functions in Excel together with the various other Excel formulas available to create great worksheets that suit your problem.

Are you interested in finding out more about what Excel can do? Make sure to subscribe to our Excel newsletter to be the first to know about the latest guides and tutorials from us.

How to Quickly Generate Random Passwords in Excel 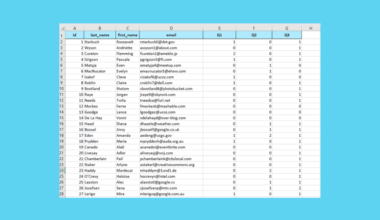 Read More
MMicrosoft Excel
This article will explain a few methods you can use to add leading zeros in Excel. A leading…

Read More
MMicrosoft Excel
This guide will explain how to paste to visible cells only in Excel. By default, selecting a range…

Read More
MMicrosoft Excel
This guide will help you understand how to calculate the confidence interval of a population mean in Excel.…

Read More
MMicrosoft Excel
This is the ultimate guide on how to use the TOCOL function in Excel.  The rules for using…