How to Create a Radar Chart in Google Sheets

You may be more familiar with a spider chart, web chart, star chart, or even polar chart. These are all radar charts. A radar chart can be used to compare data groups and entities with different characteristics.

A radar chart can quickly compare huge amounts of variables in one place. This allows the comparison to appear less cluttered and readable. This is because the data are represented by shapes, also known as polygons.

Shapes help create a simple visual by laying on top of each other for us to compare. By using a radar chart in Google Sheets, outliers are also easily detectable since the data would be exemplified into a drastic change in shape.

Anatomy of a Radar Chart in Google Sheets

While a radar chart can look tedious and complicated at times, it is quite straightforward to grasp by understanding a few basic features:

Let’s use some examples to grasp better how to use a radar chart in Google Sheets!

A Real-Life Example of Using Radar Chart in Google Sheets

Imagine you open a cafe. It is due to order the monthly cakes for the cafe but could not decide which bakery shop to choose from.

There are three bakeries to choose from, each offering its signature cakes for you to taste. You have rated the cakes from each bakery according to a score of five; however, there are no clear winners.

In this scenario, a radar chart is a perfect tool to help visualize these data and show which cake would be the best.

You may make a copy of the spreadsheet using the link I have attached below.

How to Use Radar Chart in Google Sheets

Imagine you are a basketball coach for an elite basketball team. It is the season to recruit some new players. You have been eyeing a few basketball players and shortlisted three players.

Each player has unique qualities and brings different synergy to the team. Hence, we can use the radar chart to reveal which player has the best attributes.

You have collected the data from past basketball leagues that the three players have been in.

Now we can decide which features are more desirable and which player to recruit from there.

There you go! Now you have a few ideas on how to use the radar chart in Google Sheets to visualize your data better.

Don’t forget to check out other cool functions in Google Sheets to enhance and simplify work for your everyday use!

Hello! I am currently working in the audit field and also a fellow excel enthusiast! Dealing with Excel worksheets daily, lets me discover a vast variety of functions and combinations of formulas that allows endless possibilities. Can't wait to showcase more functions that you never knew existed!

How to Use If and Nested If in Google Sheets

How to Use IMCOSH Function in Google Sheets

Read More
GGoogle Sheets
This guide will explain how to fix comments that are far away from their attached cell in Excel.… 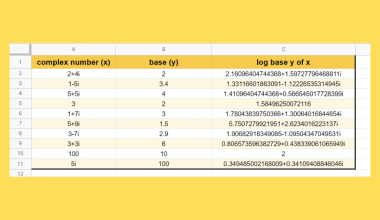 Read More
GGoogle Sheets
The COUNTUNIQUE function in Google Sheets counts the number of unique values in a dataset. It is especially…