How to Rank Non-Continuous Range in Excel

This guide will explain how you can use the RANK function to rank a non-continuous range in Excel.

The RANK function allows you to give a numeric rank to a value in comparison to other values in the list. While users commonly rank values that belong to a single range, Excel gives us the option to rank non-continuous cells.

The rules for using the RANK function in Excel are as follows:

Let’s take a look at a quick example of when you might need to rank values in a non-continuous range in Excel.

In the example below, we have a table with a list of values and their corresponding type. Each fourth cell in column B is the sum of the previous three values. Is it possible to output the rank of these summations to know which type among the three has the highest value?

The RANK function’s second argument can simply be a list of non-continuous cells. If we provide cells B5, B9, and B13 as our second argument, we can find out the rank of each cell against each other.

Now that we’ve described an example where we’ll need to use the RANK function on a non-continuous range, let’s explore a real working example in Excel.

A Real Example of Ranking Non-continuous Ranges in Excel

Let’s take a look at a real example of the RANK function being used in an Excel spreadsheet.

In the example below, we’ve used the RANK function to compute the rank of three cells. We’ve also used the IFNA function to ignore any #N/A errors for cells with values outside the three we’re interested in. 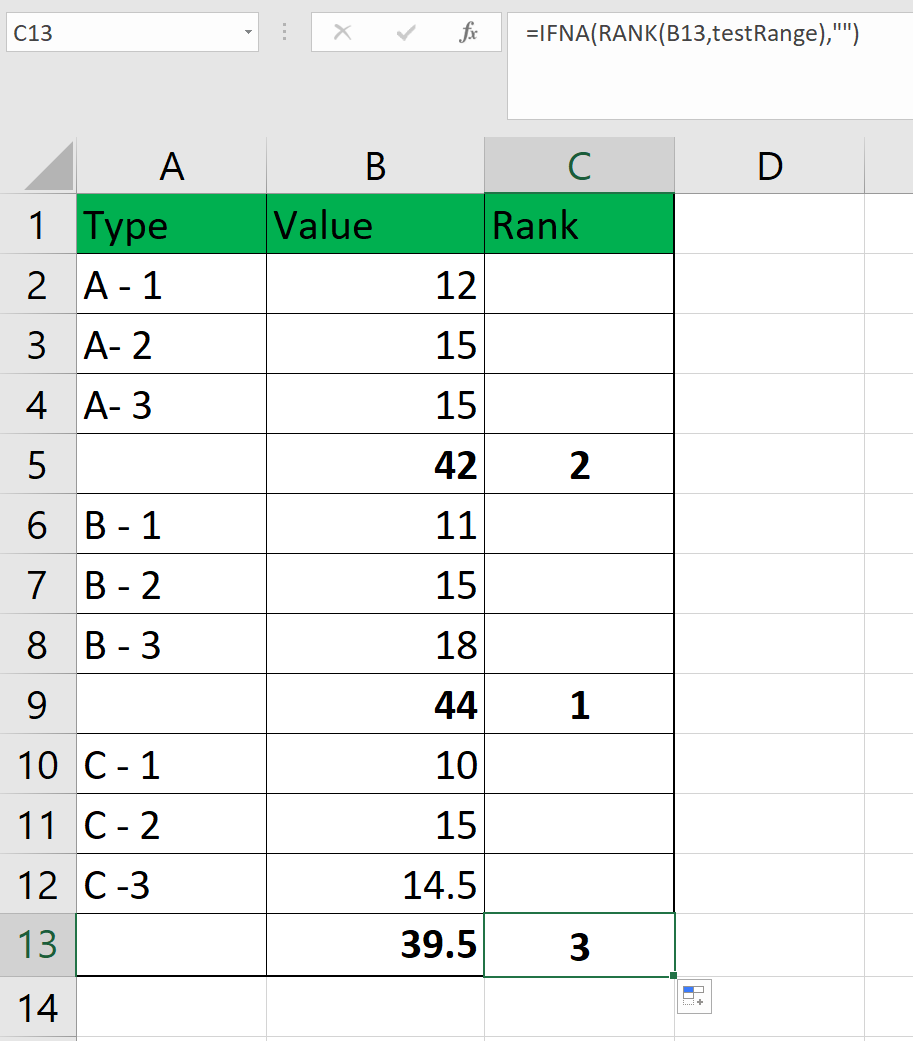 To get the values in Column C, we just need to use the following formula:

The ‘testRange’ argument is a named range that refers to the cells B5, B9, and B13. In the next section, we will explain how to create your own named non-continuous range.

If you’re ready to try out the RANK function in Excel with non-continuous ranges, let’s start writing it ourselves!

How to Rank Non-Continuous Range in Excel

Alternatively, we can also give our non-continuous range a name to easily reference it in our RANK function. The following steps will show how we can accomplish this.

The RANK function is just one of many mathematical functions in Excel. With so many other Excel functions out there, you can certainly find one that can help your use case.

Are you interested in learning more about what Excel can do? Make sure to subscribe to our newsletter to be the first to know about the latest guides and tutorials from us.

How To Automate Tasks in Google Sheets With Macros

How to Insert a Specified Picture into a UserForm in Excel

Read More
MMicrosoft Excel
This is the ultimate guide on how to use the TOROW function in Excel. The rules for using…

Read More
MMicrosoft Excel
The PROB function in Excel is useful when you need to calculate for probability in Excel. This guide…

Read More
MMicrosoft Excel
This guide will discuss how to display numbers as fractions in Excel using two simple and efficient ways. …

Read More
MMicrosoft Excel
This guide will discuss how to use the MID function to end of string in Excel. The rules…