How to ROUND Numbers in Google Sheets

The ROUND function in Google Sheets is useful if you want to reduce a value by a specific number of decimal places.

Meaning, the rounding digit(s) is rounded up or round down to provide a more manageable figure.

The rules for rounding numbers in Google Sheets are as follows:

Just the other day I was trying to log my daily grocery expenses and you know how some products are priced like $12.90 or $17.95?

Well, dealing with decimal numbers is a nightmare when you’re keeping tabs on the total expenses when they have .96, .52, .01 values at the back. Hence, by using the ROUND function, I was able to round up to the nearest value to easily total up my expenses.

Simple and it gets the job done ✅

Now that’s just one example of using ROUND functions in Google Sheets and you may have a lot of uses for it such as rounding up the product prices for your e-commerce products, rounding up a few mathematical numbers for your schoolwork or just for the sake of simplicity.

Whatever reason you might want to do it for, the ROUND function exists to make your task happen.

Great! Let’s dive right into real-business use-cases where we will deal with actual values and as well as learn how we can write our own ROUND function in Google Sheets to automate our rounding tasks.

The Anatomy of the ROUND Function

So the syntax (the way we write) the ROUND function is as follows:

1. How do I make my ROUND to always round up and not down?

2. How do I make my ROUND to always round down and not up?

Again. There’s a function for that too. You’ve guessed it, it’s ROUNDDOWN(). ROUNDDOWN() will round down the number to the next increment. The syntax for ROUNDDOWN() is exactly as the above ROUND functions which are =ROUNDDOWN(value, places) Here are a few examples of how it is used:

Feeling overwhelmed? It’s alright. We will go through it together and you will understand it once you start practice applying it, which we will be doing next.

A Real Example of Using ROUND Function

Take a look at the example below to see how ROUND functions are used in Google Sheets.

As you can see the ROUND function rounds up the value 826.645 using different places (number of places).

ROUNDUP and ROUNDDOWN functions can also be used but as we discussed above there are useful when you’re confident about the way the value should be rounded towards.

The rounded value will be output as a result.

You may make a copy of the spreadsheet using the link I have attached below. 🙂

The option to extend the usability of the ROUND function is also available as you can combine it with functions like SUMIF, DSUM, SUMPRODUCT, etc.

For instance, the following formula will sum up all the values in the range of the cells given using the SUMIF function and then proceeds to ROUND it up.

You can also use SUMPRODUCT to add up a range of values from cells and then multiply them together before ROUND-ing them up.

I will write a more advanced tutorial on how you can use ROUND functions with other functions in the coming weeks. Be sure to subscribe to be notified. 🙂

Great! Let’s begin writing our own ROUND function in Google Sheets.

How to Use ROUND Function in Google Sheets 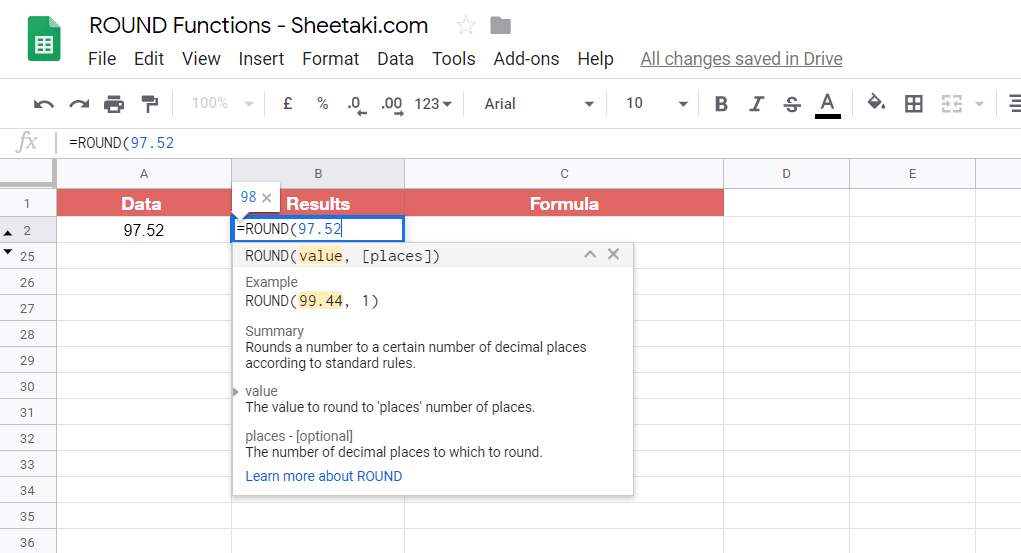 That’s pretty much it. You can now use ROUND functions in Google Sheets together with the other numerous Google Sheets formulas to create even more powerful formulas that can make your life much easier. 🙂

Hi! My name's Mako and I'm a Computer Science graduate turned professional freelance writer. I started freelance writing as a part-time job during college, but I've since fallen in love with writing and immediately made it a full-time job after graduating. I've used Google Sheets for almost everything in my personal and professional career: keeping accounts, tabulating expenses, managing team assignments, just to name a few.

How to Use COUNTIF Function in Google Sheets

How to Highlight Cells Based on Multiple Conditions in Google Sheets

Read More
GGoogle Sheets
This guide will explain how you can use the SUMPRODUCT function with merged cells in Google Sheets. We’ll…

Read More
GGoogle Sheets
The use cases for line graphs vary greatly and without a shadow of a doubt, it is one…