How To Merge Cells In Google Sheets

Consider the spreadsheet Sales Report, as shown in the image below. Suppose you need to format the headers such that the first header would span columns from B to F. Similarly, for the second header we need to span it from column B to F. This can be done by merging cells.

After we merge these cells, we would be able to apply further formatting to the headers. So let’s get started and learn how to merge cells in Google Sheets.

As you can see, the headers span many cells. If we do not merge these cells, then we couldn’t format the headers the way we want. Let’s assume we want our spreadsheet to look like this:

The headers can be formatted in this way only if we merge the columns and rows that it span. Now, if you’re curious to learn, then go through the tutorial. After you read the tutorial, you’ll be able to produce the same result.

How should we go about this problem?

We’ll start with our Sales Report spreadsheet. We’ll start merging cells for the main heading and then we’ll move on to the sub-heading.

The Merge all option merges all the cells into one big cell as illustrated in the image below. However, this option works only for a contiguous range of cells.

Now as you’ve learned about different merge options in Google Sheets, let’s apply them to our spreadsheet.

How to Merge Cells In Google Sheets on Desktop

How to Merge Cells In Google Sheets on Mobile

In this tutorial, we’ll work with a blank spreadsheet and learn how to merge cells while you’re using Google Sheets app on your iPhone or Android phone.

Hello, this is Aamir Farooq Khan from Pakistan. I'm a software engineer with a passion for writing. I aim to combine my technical skills with my writing skills to produce content that could be helpful to the readers. I am open to work and collaborate with people without any discrimination based on religion, race, color, gender, or nationality.

How to Use AVERAGEA Function in Google Sheets

How to Use PDURATION Function in Google Sheets 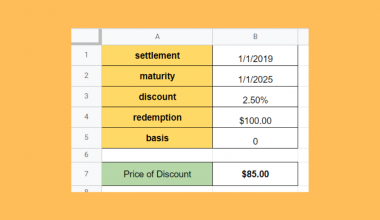 Read More
GGoogle Sheets
Adding a trendline in Google Sheets lets you show the general trend of datasets in your chart. Sometimes,…