How to Write a Recursive LAMBDA Function in Excel

A Recursive LAMBDA function in Excel is useful when you need to create a recursive or iterative solution to a problem.

The rules for using the LAMBDA function in Excel are as follows:

Let’s take a look at a problem that can be solved using a recursive solution.

If we only wanted to remove one character then the solution is trivial. We can simply use the SUBSTITUTE function to replace the character with an empty string. However, since we’ll be removing a set of characters, we will have to call the SUBSTITUTE method multiple times.

Now that we know when to use the LAMBDA function, let’s dive into how to write the function itself.

The Anatomy of the LAMBDA Function

The syntax of the LAMBDA function is as follows:

Let’s dissect this formula and understand what each of these terms means:

A Real Example of Using a Recursive LAMBDA Function in Excel

Let’s take a look at a real example of the LAMBDA function being used in an Excel spreadsheet.

In the table below, we created a custom recursive function to clean text. Users simply need to add the characters to remove in cell D2. The values in column B are obtained using a named function called RemoveChars.

To get the values in Column B, we just need to use the following formula:

The RemoveChars function is defined using the LAMBDA function:

How does this function work? Let’s break it down into a few parts.

The core of the function is a SUBSTITUTE formula that tries to find the left-most character in cell D2 in a given string.

With each iteration, the formula will remove the leftmost character from the original value in D2. This will effectively give us a new character to substitute at each iteration. We can use the RIGHT and LEN functions to do this.

This will give us the following formula:

Finally, we need to structure the LAMBDA function to use the RemoveChars function recursively.

All recursive functions must have a point of exit or a condition that stops the recursion. In this case, we want the formula to stop removing characters once the chars parameter is reduced to an empty string.

While the chars parameter is not an empty string yet, the formula should proceed with the recursion.

This is why the final formula has a structure like this:

If you’re ready to try out the LAMBDA function in Excel, let’s begin writing it ourselves!

This section will guide you through each step needed to start using recursive LAMBDA functions in Excel. You’ll learn how we can use a recursive implementation of the SUBSTITUTE function to remove an arbitrary set of unwanted characters.

Follow these steps. to start using the LAMBDA function:

That’s all you need to remember to start using the LAMBDA function in Excel. This step-by-step guide shows how you can easily create your own custom recursive solution that you can call anywhere in your sheet.

You can now use the LAMBDA functions in Excel together with the various other Excel formulas available to create powerful and efficient spreadsheets.

Are you interested in learning more about what Microsoft Excel can do? Stay notified of new guides like this by subscribing to our newsletter!

How to Create Value at Risk Template in Excel 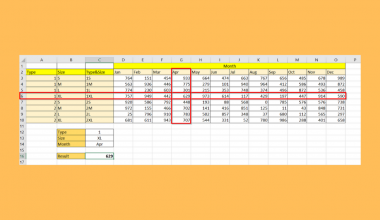 Read More
MMicrosoft Excel
This guide will explain how to paste to visible cells only in Excel. By default, selecting a range…

Read More
MMicrosoft Excel
This guide will explain using the TEXT function to convert decimal values into the equivalent number of days,…