How to Use BINOMDIST Function in Google Sheets

The binomial takes into account binary events or situations with only two possible outcomes. A binomial distribution is the likelihood of success or failure of an outcome repeated or observed multiple times in trials. A cumulative distribution, on the other hand, is the maximum number of successful trials.

The rules for calculating binomial distribution in Google Sheets are as follows:

Given that, you are 21.88% likely to get 5 heads out of 8 coin tosses. We’ll get into detail about how we got this answer later on.

With Google Sheets and an understanding of the BINOMDIST Function, you can answer this question and many others following the conditions outlined in bullet points earlier. You can also imagine that this would be helpful with problem solving during your math class.

So, buckle up, and get to know how to use the BINOMDIST function in Google Sheets through this article. We’ll explain our process step-by-step and we even have a sample spreadsheet that you can make a copy of to guide you even better.

The Anatomy of the BINOMDIST Function in Google Sheets

First, let’s get to know the syntax (the way we write) of the BINOMDIST function. This goes as follows:

A Real Example of Using the BINOMDIST Function in Google Sheets

Now, let’s take a look at the example below to see how to use the BINOMDIST function in Google Sheets.

In this situation, I’m doing a survey on what breed of dogs that homeowners with children would prefer to have in their household. I have a sample size of 60, and I know that 70% of the entire population would opt to have a Golden Retriever. With that, I’m trying to figure out the probability that 35 out of my 60 survey participants would say they want a Golden Retriever.

This is the same way we get the 21.88% probability to get 5 heads out of 8 coin tosses mentioned in the example up in the introduction of this article.

In the chart, you’ll see, the probabilities are summed to result in the cumulative probability up to that point. This is useful when the problem asks for probability of at least or at most a certain number instead of exact.

To make this guide easier to follow through, you can go ahead and make a copy of the spreadsheet I made with the link attached below.

Make a copy of the example spreadsheet

At this point, we will now get into the steps of using the BINOMDIST function given the example situation I have presented.


How to Use the BINOMDIST Function In Google Sheets

1. First, select any cell to make it active. For this guide, I’ve written down the given to my problem on the Google Sheet and I’ve designated F3 to be where my first result goes. You don’t have to encode everything down the way I did if you only want the results.

2. Next, simply type the equal sign ‘=‘ to begin the function and then follow it with the name of the function which is ‘BINOMDIST‘ (or ‘BINOMDIST‘, whichever works). While you’re typing, an auto-suggest box will appear with the BINOMDIST and the BINOM.DIST functions, among other binomial formulas. They both work the same, actually, but here, I chose BINOMDIST.

3. Then, input all the needed items accordingly and separate them with commas. For now, use ‘false’ as the cumulative. This will show the probability of a certain outcome happening given the inputted number of trials.

4. Now, chose another cell and repeat steps 1 to 5 but this time, choose ‘true’ as the cumulative. This will show the sum of the probabilities up to the inputted number of successes.

You’ve just learned how to use the BINOMDIST function in Google Sheets. Get to know other Google Sheets formulas so that you can make the most out of this wonderful tool. Also, make sure to subscribe to be notified of our future posts.

Hi. I'm an Economics student who uses Google Sheets a lot for academic purposes. It has helped me in managing my personal expenses and other monitoring and evaluation activities. Together, let's learn the workings of this wonderful web-based spreadsheet application!

How to Use FORMULATEXT Function in Google Sheets

How to Use CONCATENATE Function in Google Sheets 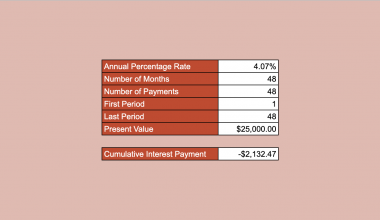 Read More
GGoogle Sheets
The ISEMAIL function in Google Sheets is used to determine if a value is a valid e-mail address.…